Technology which is combined with the resourse in the nature world and the leading edge of technology.

KEEP-TERAHERTZ is a more advanced version of the newest terahertz technology used around the world. KEEP uses the ideal terahertz wave-radiating time at a low temperature to increase the performance of raw materials. Existing terahertz machines radiate terahertz waves at high temperatures, which is not as effective.

The energetic ore particles that radiate negative ion electon, which has the highest numerical value in the nature world, and FIR.

THE 'TERAHERTZ GAP' - WHERE UNTIL RECENTLY BRIGHT SOURCES OF LIGHT AND SENSITIVE MEANS OF DETECTION DID NOT EXIST - ENCOMPASSES FREQUENCIES INVISIBLE TO THE NAKED EYE IN THE ELECTROMAGNETIC SPECTRUM, LYING BETWEEN MICROWAVE AND INFRARED IN THE RANGE FROM 0.3 TO 3THZ. TERAHERTZ RADIATION, ALSO KNOWN AS T-RAYS, HAS WAVELENGTH OF 3-100 CM-1. 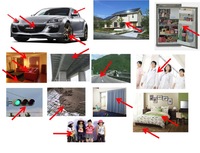 KEEP is in the ore in which the highest numerical value of a nature carries out an anion electron and far-infrared radiation, and the far-infrared rays of leading-edge technology. It is the new technology which combined the Terahertz wave which was strange frequency.

It turned out that the application to all the industries is possible.

70% of the surface area of the earth was covered with water, and it noted that 60% or more of human bodies were constituted with water.

The object which oscillates in water the electromagnetic waves of the far-infrared domain which carries out resonance resonance was studied.

It is original and does research and development in the technical machine with which the KEEP wave and the Terahertz wave were united.

It is the technology which has only one set in the world.

It is the feature that the feature of Terahertz Technology achieves the effect which was excellent not only in industry but the material which comes into contact with directly to man especially compared with the Terahert machine of the other company.

The application to all the industries is possible.

After cooperating with an old material, aiming at an improvement and the further performance gain of the conventional material, we make the impossible possible and offer it till yesterday.

We can provide precious service, when a market is saturated and a new enterprise is reclaimed.

When you are developing the active conduct of business of business, we are the latest new technology-like and support new business deployment in a domestic and international style.